How Do You Find the Time?

"How do you find the time?"

I get asked that question a lot and I really don't know the answer. I know that I just do the thing that I get enjoyment from and the things that need to be done.

A single parent, a working professional, someone who loves to read, knit, craft and create, someone who is working really hard to create a good life for herself and her kids. I know I'm not the only one out there, and I enjoy reading the blogs of others, so I thought, "well, why not?" So here we go!


Sunday:
Beef Stew – Use leftover veggies and meat from this week – roast beef and  corned beef
Potato pancakes – use leftover potatoes and mashed potatoes
Monday:  Chicken Enchiladas with Salsa Verde from here.
Tuesday:  Leftovers
Wednesday:  Parmesan Crusted Chicken from here.   I'm going to modify it based on comments I've read and instead of using mayonnaise, I'm going to use a dressing I made with light mayo, Greek yogurt, ranch dressing mix and homemade pesto.
Thursday: Leftovers
Friday:  I'm going to make this because it can be done in the crock pot.   I'll use cream of mushroom soup and add garlic.  My parents will be here and the kids need to eat.
For Saturday - I'll have a house full of people and we will all eat before going to see Our Town - so we will have a repeat of something I made a few weeks ago that was quite good!
Have a great week!
Posted by Lois at 6:58 PM No comments:

Benefits of Meal Planning and plan for March 11 - 18

I've been very dutifully planning meals for a little over a month and I'm definitely seeing a number of benefits to going through this exercise.    The benefits include:

A couple of other things that I have recently started doing:

So here is our plan for this week - including what we had for dinner last night. 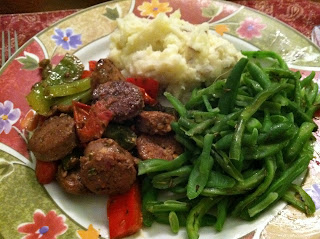 *this was a recipe I created to use the peppers and onions that I had in the refrigerator.

My oldest thought that the green beans smelled like "summertime - like when you are digging in the dirt and it smells good."   He noted that they did not taste like dirt, though!

Wednesday
Chicken with Tarragon and Leeks - recipe from Real Simple Magazine, April 2009
(I'm excited about this recipe because I love both tarragon and leeks)    If it's as good as I hope it is, I'll post the recipe.

Saturday:  Will determine based on what is in the refrigerator.
Posted by Lois at 4:34 AM No comments:

I was busy again this weekend, despite having the day off from work on Friday!   We got a workout in every day this weekend (Saturday with our trainer, Moses, who worked us over with the circuit from hell)!    I also had to do some baking this weekend because I signed up to bring snacks for the theatre group on Monday.   The kids get to school  around 7 a.m. and are at rehearsal from about 2:45 - 5:30 p.m.     The director instituted a snack time this go around and I think it's been a good thing.   I made congo bars (see prior post) and brownies from here.   This particular brownie recipe is amazing and is my go-to recipe.   Easier and cheaper than a box of brownie mix and much better!

Tonight I made this! 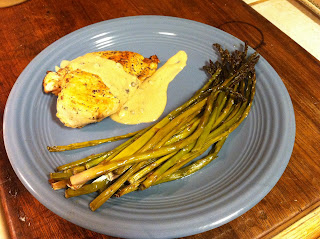 Oh my gosh, it was wonderful and the recipe can be found here!      Only Jacob and I were home, so there are leftovers, which may change my plans for later on this week.   Here's tonight's recipe as I did it and my plans for the rest of the week: 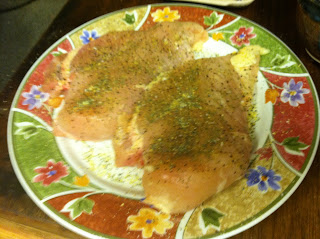 Heat a skillet and add olive oil and butter.   Once the pan is hot, add the chicken breasts and sear both sides.    I added a lid to the pan and let it cook a while on the stove and because I had to cook it in two batches, I put the first chicken breasts in the oven and cooked them with our asparagus that was roasting. 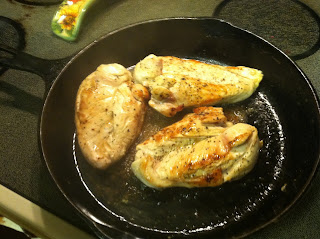 Once finished, remove the chicken breasts from the pan and deglaze the pan with the wine.   Add the half and half and bring to a simmer, stirring frequently.   After about 2 minutes, add the capers.    The original recipe said it would be done at this point, but I found that I had to make a roux and thicken the sauce.    I used the butter and flour to make a roux and added it to the sauce.   I found it needed about 1/2 cup more of half and half.

We served this with roasted asparagus.   It was delicious!

For the rest of the week, here is our plan!